The Atlantic Sturgeon Need Your Help! 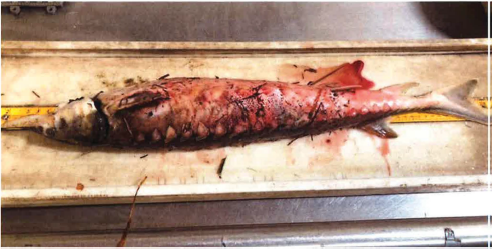 NMFS has been failing to perform its legal duty to protect Atlantic Sturgeon on the brink of extinction that are being killed by PSEG’s Salem Nuclear Generating Station. Tell them to take swift, strong and immediate action to protect these majestic species for present and future generations!

Once again, the National Marine Fisheries Service (NMFS) is failing in its duty to protect the endangered Atlantic Sturgeon of the Delaware River. Your letter to NMFS today could help end this irresponsible behavior before it’s too late.

The Delaware River population of Atlantic Sturgeon, which is designated as endangered pursuant to the Endangered Species Act, is genetically unique and today has a surviving population that includes less than 300 spawning adults. With numbers this precariously low, the responsibility for vigilant protection by the National Marine Fisheries Service (NMFS) and all government agencies and private actors could not be greater. While NMFS has approved the Salem facility to kill Delaware River Atlantic Sturgeon over its life, the level of kill seems to be increasing and we at the Delaware Riverkeeper Network are alarmed by the takes and the failure of NMFS to act.

In just 4 months in the beginning of 2019, there were found at Salem 9 dead Atlantic Sturgeon, 6 injured Atlantic Sturgeon, and 2 injured Shortnose sturgeon. If this rate continues, by the end of 2019 there will have been 45 injured or killed Atlantic Sturgeon.Based on reports from previous years, there is every reason to believe that this is not an idiosyncratic year but rather a disturbing pattern. While NMFS does allow Salem to take some Atlantic Sturgeon from the River, on the order of 200 incidental takes by the year 2040, this current amount of take is obviously too high.

There are just 300 spawning adults left of the Delaware River’s genetically unique population of Atlantic Sturgeon.  You can quickly see how this level of take – 45 in just one year -- could overwhelm the species in no time.

As NMFS is aware, closed cycle cooling is an alternative technology that could be employed at the Salem Nuclear Generating Station and would substantively reduce the impact of Salem on endangered species and all aquatic resources (reducing fish kills of all species by over 95%). The New Jersey Department of Environmental Protection relied, in part, upon NMFS’ incidental take statement when issuing its renewal of PSEG’s NJPDES Permit, in 2016, and allowing Salem to continue to use of its antiquated OTC system.  This system impinges and entrains fish, causing grievous injury and traumatic deaths.

Call upon NMFS today to exercise its authority to reinitiate Endangered Species Act consultation to reevaluate what is going on. Urge them to include consideration of other presently available and affordable alternative technologies that could reduce the kills by as much as 95% or more, like closed cycle cooling.  Urge NMFS to reconsider its incidental take exemptions and to reevaluate the devastating and cumulative harms inflicted upon endangered species by Salem’s continued operation of its antiquated OTC systems which cause unnecessary and grievous injury and death in numbers that do jeopardize the existence of endangered species, including the Atlantic Sturgeon .

NMFS acting as a Rubber Stamp on the devastating damage being inflicted to the sturgeon populations of the Delaware River is unacceptable and must stop. Write to NMFS today, and feel free to use or edit the sample text in the form below, to urge the agency to immediately protect these majestic species for present and future generations.

You can read the Delaware Riverkeeper Network’s letter to NMFS, here.

By clicking submit you grant The Delaware Riverkeeper Network permission to retain this information. For our Privacy Policy, please visit: http://www.delawareriverkeeper.org/privacy-policies