van Rossum was one of the original petitioners in the landmark Robinson Township v. Commonwealth of Pennsylvania case decided by the PA Supreme Court in 2013 which strengthened environmental standing opportunities, declared unconstitutional key sections of the pro-drilling Act 13 legislation, and reinvigorated the strength of Pennsylvania Constitution’s Environmental Rights Amendment for protecting the right to pure water, clean air and a healthy environment for present and future generations. van Rossum was a petitioner in both in her individual capacity as the Delaware Riverkeeper and as leader of the Delaware Riverkeeper Network. 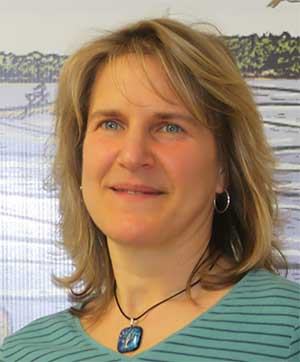 As the Delaware Riverkeeper, van Rossum also serves on a number of the region’s water quality committees, including the Delaware River Basin Commission’s PCB’s Implementation Advisory Committee and Water Quality Advisory Committee, and on New Jersey’s Stormwater Focus Group. van Rossum serves as a member of the Area Plan Committee and the Area Maritime Security Committee, both of which are committees of the United States Coast Guard, the Philadelphia Group.

van Rossum’s River expertise is also valued by educational and art organizations. For example, in April 2015 van Rossum was asked to join the Advisory Committee for the Art@Bartram’s Advisory Council to give input into an arts initiative designed to bring people closer to the Schuylkill River and Bartram’s Garden.

van Rossum is a licensed attorney in three states: Pennsylvania, New Jersey and the District of Columbia. Since Spring 2002, van Rossum has served as an adjunct professor and director of the Environmental Law Clinic at Temple’s Beasley School of Law which she founded.

van Rossum generally focuses her attention on adult and young adult audiences, but she will offer her time and passion for speaking to younger generations as well, with a goal towards inspiring their love and care for our natural resources. 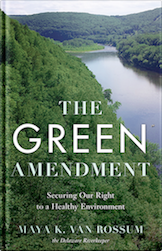 For decades, activists have relied on federal and state legislation to fight for a cleaner environment. And for decades, they’ve been fighting a losing battle. The sad truth is, our laws are designed to accommodate pollution rather than prevent it. It’s no wonder people feel powerless when it comes to preserving the quality of their water, air, public parks, and special natural spaces.

But there is a solution, argues veteran environmentalist Maya K. van Rossum: bypass the laws and turn to the ultimate authority — our state and federal constitutions.

In 2013, van Rossum and her team won a watershed legal victory that not only protected Pennsylvania communities from ruthless frackers but affirmed the constitutional right of people in the state to a clean and healthy environment. Following this victory, van Rossum inaugurated the Green Amendment movement, dedicated to empowering every American community to mobilize for constitutional change.

Now, with The Green Amendment, van Rossum lays out an inspiring new agenda for environmental advocacy, one that will finally empower people, level the playing field, and provide real hope for communities everywhere. Readers will discover:

100% of the proceeds from the sale of The Green Amendment go to the Delaware Riverkeeper Network. Buy it now

The Delaware Riverkeeper Network was featured on NJTV's program, "Here's the Story: Rivers".