The steep slopes of the Delaware watershed's Piedmont end abruptly at the Kittatiny Ridge, with the 3,000-4,000 foot peaks of the Pocono and Catskill Mountains giving way to the gently rolling hills and sweeping valleys of the Piedmont. The difference between the two regions is dramatically illustrated as the River spills through the Delaware Water Gap, a narrow opening in the Kittatiny Ridge. Similar geologic gaps occur in the Appalachian ridges as several Delaware tributaries enter the Piedmont. 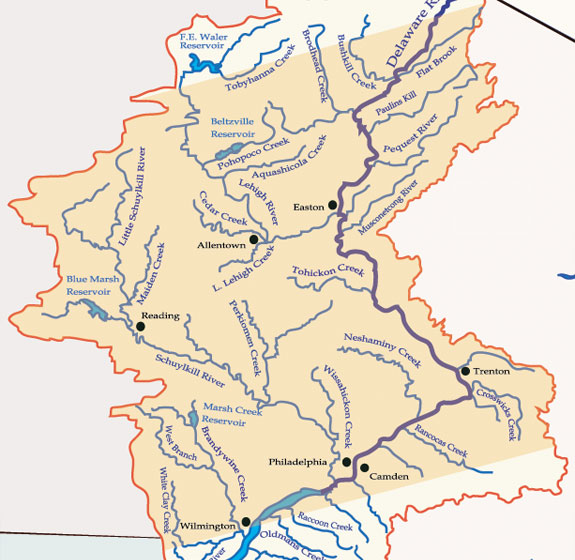 The Piedmont region's southern border is defined by the fault-line that extends from Philadelphia north to Trenton. This fault also defines the end of the continental shelf, and its slight drop prohibits most tidal waters from extending any further upstream. There are three distinct regions in the Piedmont - Great Valley, Upland Piedmont, and Lowland Piedmont, with all three areas being characterized by dolomite and limestone bedrock. As the Delaware runs through the region it not only widens and slows, but its flow is increased by the confluence of the Schuylkill and Lehigh Rivers, respectively the first and second largest tributaries in the watershed.

The area has a rich natural history - originally the Piedmont Region was covered in an almost contiguous mature forest, and was a transition zone between the northern plateau (white pine, Eastern hemlock, beech, and maple) and southern (white oak, American chestnut, hickory, and chestnut oak) primeval forests. In pre-human eras natural events, such as fire and storms, changed soil composition and shade that resulted in a diverse, new forest cover.

Most of the original virgin timber forest was cleared by settlers, farmers, and lumbering operations. Today, approximately half of the Piedmont is wooded, with the areas differing in both maturity and species composition. The exposed rich soils now support lush pastures, a variety of truck crops and an increasingly large human population.

A number of animal species have disappeared along with the primeval forest, including the passenger pigeon, mountain lion, black bear, and Canada lynx. Their cries have been silenced as a result of habitat loss, bounties and over-hunting. Medium sized mammals like raccoons, squirrels, rabbits, skunks, and woodchucks are still common. Deer, pheasants, rabbits, ducks, turkeys and many of the smaller songbirds still thrive in the Piedmont area as well.

Originally, sturgeon, shad, salmon, trout, perch, American eels, and mussels thrived in the Delaware and its tributaries. Anadromous species (shad, eels, and salmon) freely traveled upriver from the ocean in order to spawn, with the early settlers reporting that the runs were so thick that the waters could almost be crossed by walking on the fish. While not as plentiful as in those early days, there are a still a number of important fish populations in the watershed. Trout, salmon and walleye are stocked in various streams and ponds throughout the watershed, while the lack of dams along the main stem Delaware has led to the continued presence of eels and shad.

Water Quality and the Schuylkill

The Schuylkill River is draped in history, and is intertwined with the path of exploration and development west of the coast. The Lenni-Lenape are popularly considered the original people of the area, but they too migrated to the Schuylkill valley from the Mississippi River valley to subsist seasonally on all that the rich Piedmont area had to offer. The Lenni-Lenape labeled the Schuylkill River "Ganshowahanna" which meant "Falling Waters" presumably for the falls at the fault line near what is now the Fairmount Water Works.

As the first westerners came to the area they sailed right past the mouth of the Schuylkill which drains into the estuary region of the main stem Delaware. Arendt Corssen, who explored the Schuylkill for the Dutch East Indies Company, named the river "Schuyl Kil" meaning hidden river, for the reeds, sedges and grasses that hid the mouth of the Schuylkill. With Charles II's grant to William Penn, the land and rivers of Penn's Woods were charted and explored. For whatever reason people came, either to escape religious persecution or to explore new territory, industry and development was bound to follow.

In the late 1700's the anthracite coal industry began in the headwaters the Schuylkill River. Canal systems were constructed to ship the coal down to Philadelphia past the different series of rocky falls along the 125 miles of river. At its peak 20 million tons of coal was extracted from the ground annually. With the shift to strip mining, a greater amount of coal could be mined and an excess of 6 million tons of coal was mined in 1860. Strip mining quickly accounted for three-quarters of the total amount. Between 1880 and 1962 roughly 450 million tons were extracted and processed.

The intensity of the mining efforts caused major problems with in the Schuylkill and Delaware rivers. Streams were filled with a slurry of sediment that resulted when large boulders were broken up. The forests were clear-cut to produce supports for the mines, and acidic conditions resulted when sulfur from the mined rock was exposed to water and oxygen. The acidic water leeches out metals such as iron, manganese, aluminum, calcium, and magnesium. During the worst years, the acidic waters contaminated the Schuylkill downstream as far as Reading, and the culm was flushed 30 miles into the Delaware estuary. Much of the outwash today drains from ancient mines and mine pools. Fortunately, the acidic waters that are added to the upper Schuylkill are buffered naturally by the flow from two limestone tributaries of the Great Valley, Maiden Creek and Tulpehocken Creek.

Although government and citizen actions to address widespread water pollution problems has a long history, major success was attained after the passage of the Federal "Clean Water Act" in 1972 (actual name was 1972 Amendments to the federal Water pollution Control Act). This legislation, signed into law by President Nixon, contained stronger enforcement procedures and ample funding for upgrading wastewater treatment plants. As a result, major gains in cleaner water were obtained throughout the Delaware River Basin and elsewhere. This act was less successful in getting results from the various nonpoint source and stormwater programs also required by the act. Over 30 years latter, this lack of success has been compounded by the expansion of urban and suburban growth and corollary populations and roadways into formerly undeveloped or lightly developed areas. In recent years, river scientists and managers have also realized that the degradation of our piedmont streams is not limited to pollution inputs, it includes changes to the natural flow, habitats, and stream morphology resulting from increased impervious surfaces and decreasing natural vegetation that accompanies development of the watershed.