The Delaware River's Uplands extend from the Catskill and Pocono mountains where it bubbles forth as cool mountain springs and trickling streams, to Hancock, NY where its East and West Branches meet to form the main stem, which flows down to the Delaware Water Gap where it enters the Piedmont section of the watershed. 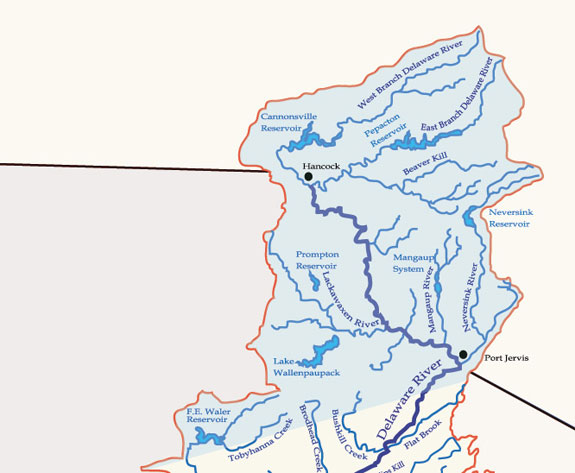 Throughout this stretch of river you can see the beauty of a vegetated riparian bank, many historical sites, and a diverse wildlife population. The landscape in the Delaware Uplands is surely a sight for sore eyes, there is a contrast of farmland and villages on the valley floor, with forested hills surrounding. The Delaware River Gorge, which extends from Matamoras, PA and continues for much of the corridor's length, is located within the Uplands region. This remarkable feature has been identified by the Pennsylvania Geological Survey as an "outstanding scenic geological feature."

Delaware as Wild and Scenic

The Delaware River's upper reach is unique in that it is the only major river in the northeastern U.S. that remains undammed along its main stem. It is also one of only four river sections in the Northeast to have been designated as part of the National Wild and Scenic River System. The U.S. congress has designated 73.4 miles of the Upper Delaware as part of the National Wild and Scenic program. To receive this honorable recognition a river and its surrounding environment must be "free-flowing and relatively undeveloped, possess outstanding remarkable scenic, recreational, geological, fish and wildlife, historical, and cultural resources, or other similar values."

While the Delaware's main stem remains undammed, New York City has constructed three reservoirs in the Uplands along the East and West Branches, diverting as much water as it legally can. Pursuant to a Supreme Court decree (spurred by interstate arguments during the drought of record in the mid 1960's), New York City releases water from the reservoirs for the City of Philadelphia and other downstream users. Philadelphia, along with many other river communities, draws part of its drinking water supply directly from the River. Without adequate upstream releases the Estuary's salt water line is able to advance upstream, potentially threatening the drinking water supplies of Philadelphia and Camden.

Several solutions to the River's water sharing issues have been floated, including River friendly ones such as: decreasing water demand by metering all water users; fixing system leaks; and offering water rate conservation incentives. However the plan most favored in New York was to build a dam. The plan consisted of damming the Delaware River at Tocks Island, above the Water Gap, to form a huge reservoir that would back up almost to Port Jervis. Public outcries, plentiful water and questionable cost/benefit ratios have doomed the project to dormancy, hopefully never to be awakened.

In spite of the adverse impacts to water quality caused by the reservoirs and increasing development, water quality in the Upper River is good -- so good that this section of the River has been designated by the Delaware River Basin Commission as Special Protection Waters and entitled to increased regulatory protections.

Recreational use of the Delaware is very popular in its upper reaches. The clean, fresh water and the surrounding woodlands provide for excellent recreational fishing opportunities. Sightseeing, swimming, camping, hiking, biking, horseback riding, and canoeing are just a few of the many activities people enjoy.

The River's Uplands Region is also popular for the numerous species of mammals, birds and amphibians it supports. The Delaware River Uplands are home to 50 different species of mammals including deer, raccoon, beaver, bear, fox, rabbit, opossum, woodchuck, bobcat, muskrat, and many others. Many rare species of bird such as the wild turkey, osprey, bald eagle, merganser, bluebird and pileated woodpecker are located within the Upper Delaware. Two hundred species of birds, either spend their entire life cycle in the Upper Delaware, like the ruffed geese and pheasant, or just pass through in the winter or fall on their way to wintering grounds in the south or breeding grounds in the north. The Upper Delaware is an important segment of the Atlantic flyway for migrating birds.

American shad, brown rainbow and brook trout, large and small mouth bass, chain pickerel, and walleyed pike are just a few of the 45 species of fish that are inhabitants of the Upper Delaware River. Since the River is free-flowing, shad are able to reach their spawning grounds upstream. From Maine to West Virginia, the Delaware River is one of only two natural shad rivers.

The vegetation within and supporting the Upper Delaware is as diverse as the critters that inhabit it. Oak, maple, hemlock, beech, walnut, ash, pine, dogwood, cedar, birch, rhododendron, mountain laurel, wild flowers, mosses and ferns are just a few of the 1,100 plant species to be found there. Also in this beautiful area are numerous pastures, orchards and farms -- both old and new.

This relatively unpolluted portion of the Delaware River is a remarkable piece of nature but one in danger of being loved too much. Its biggest threat is from those who want to see it each morning and evening -- those who build on its shores -- and those who want to live next to its cool, clean headwater streams. It is possible to love a river too much.