Specific agencies respond to different pollution events so be sure to contact the appropriate agency. Please click here for a list of hotline numbers throughout the Delaware Watershed that were compiled by DRN. When contacting the appropriate hotline, tell them all you can about the exact location and nature of the pollution. If you have the ability to safely walk upstream to find the source of pollution, this is ideal. Request a case number when you call, let them know you have alerted Delaware Riverkeeper Network, and request a call back from the assigned agency representative. If you have photos of the pollution, request an email address for these photos to be sent.

Paulsboro, NJ. 11/30/12 The Delaware Riverkeeper, Maya van Rossum, is investigating and speaking with agency officials on scene about a cargo train derailment that plunged several train cars into the Mantua Creek during rush hour this morning. Areas around the train derailment were evacuated due to air contamination from vinyl chloride which is a known human carcinogen. Vinyl chloride, a gas at room temperature, was present in four of the rail cars. Three of the four rail cars came into contact with the Mantua Creek. One car breached and as a result 22,800 gallons of vinyl chloride was released. It is believed that all vinyl chloride volatilized into the air but state agencies and the EPA are on scene and investigating. One of the rail cars involved was carrying ethyl alcohol (ethanol or grain alcohol). As far as we know, that car was not breached. Ethyl alcohol, or Ethanol, is a volatile, flammable colorless liquid.

The spill occurred about 1.35 miles upstream from where the Mantua Creek enters the Delaware River at River mile 89.5. The closest Delaware River drinking water intakes belong to the Philadelphia Water Department and NJ American Water Supply - both located at River Mile 110, 20 miles upstream from where Mantua Creek enters the Delaware River. The water companies are paying close attention to the incident. The Philadelphia Water Department has said that if there was a concern requiring the water intake to be closed that would only be about 6pm this evening. The EPA requires that the amount of vinyl chloride in drinking water not exceed 0.002 mg/l. The water departments will be monitoring the situation. The Delaware Riverkeeper will continue to monitor the situation throughout the weekend and report if there are new water quality concerns.

A vinyl chloride factsheet and other health and environment related information can be found here at the Agency for Toxic Substances and Disease Registry: www.atsdr.cdc.gov. Vinyl chloride is used to make polyvinyl chloride (PVC). PVC is used in various plastic products.

Placement of Spoils in Floodway along Bull’s Island 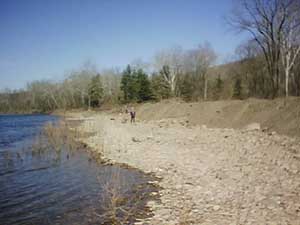 Delaware Riverkeeper Network received a hotline call on March 12, 2012 from a memberwho took photos of thousands of cubic feet of sediment, mud, tree roots and tires bulldozed along the floodway of the Delaware River on Bull’s Island near the wing dam of the Delaware & Raritan Canal. Delaware Riverkeeper Network and the volunteer on the scene called the pollution incident into NJ DEP’s hotline on March 13, 2012 requesting an inspection of the potential illegal fill (Case # 12-03-13-1441-19). 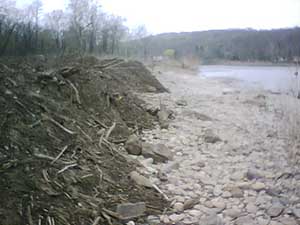 Further follow up by NJ DEP enforcement has indicated that dredge spoils from the maintenance dredging of the Delaware & Raritan Canal are the source of the fill material. Thefill material is required to be removed to an offsite stock pile location after a short dewatering period and NJ DEP is investigating permit information and disposal activity as part of the investigation. Follow up sitevisits by volunteer monitors aslate as March 25th have indicated continued grading of spoils and additional fill material added to the floodway. Delaware Riverkeeper Network has shared photo- documentation with the NJ enforcement personnel for their continuing investigation as well as the Army Corps of Engineers and continues to watch-dog the situation to ensure compliance of the permits and removal of the unconsolidated fill material from the sensitive and important floodway area of the Delaware River. 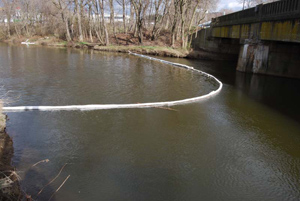 The spill was caused when an oil water separator malfunctioned and the alarm failed to go off at an underground storage tank at the Travel Center of America Truck Stop in Bloomsbury, NJ when the tank overflowed. It is estimated that over 100 gallons of the diesel/water fluid had been released into the Musconetcong and some early reports say the spill may have begun during the heavy rains the night before – causing many hours of uncontained pollution to spread. Reports indicate that the spill was detected and reported at 10:00 on Saturday morning by local Bloomsbury residents when they smelled strong diesel odors coming from the stream (the truck stop was unaware as the alarm did not sound). Early reports say it took clean up crews several hours to begin boom placement to stop the leaking fluid from entering the Musconetcong. We are unsure of why the emergency response took so long and are looking into more details.

DRN’s Deputy Director Tracy Carluccio arrived on scene at the Travel Center of America Truck Stop about 22:30 hours on Saturday where she observed booms and clean up pads still in place. On Sunday, Carluccio visited stream access points on land to look for signs of oiling and noted a faint diesel smell at the Rte 626 bridge. Members of the Musconetcong Watershed Association conducted a paddle of the Musconetcong on Sunday afternoon to look for signs of damage. Below is the report from Beth Styler Barry of the Musconetcong Watershed Association:

“This afternoon River Watcher Monitoring Coordinator Nancy Lawler and I kayaked from just below Route 519 in Pohatcong to Finesville to investigate yesterday’s oil spill. This area, specifically the Cyphers Road area, was where we saw a considerable amount of diesel product on Saturday afternoon. I am very pleased to say that we did not find evidence of yesterday’s spill on the surface of the river, on the bank, on the rocks or on the bottom of the river. We observed closely, especially on the eddies and quiet pools, but we did not see any film. We were able to smell only the slightest odor in some of the whitewater and near the Finesville Dam. We were also looking for any distressed or dead wildlife. We found one freshly dead trout that had obviously been a meal for a fellow river dweller. We found one dead sucker that we brought up from the bottom of the stream using our paddles and examined. It seemed that the fish had been dead for a few days - therefore dead before the spill. I spoke with Brian Cowden of Trout Unlimited later in the day and he told me that suckers are spawning now and that some die shortly thereafter. So it appears as if the worst is over for the Musky from this particular incident. So we will now turn our attention to discovering exactly what happened and why the Travel America station needed to be informed by local citizens and the HazMat team that there was a leak. We’ll investigate why their system failed, and what must be changed to prevent a recurrence.”
Check back for more details as we investigate further. 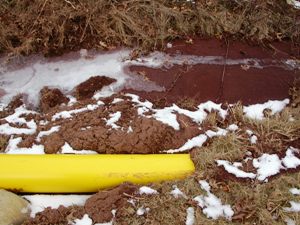 January 24, 2008 - Delaware Riverkeeper Network received a hotline report January 23rd about a new gas pipeline being laid in Hunterdon County, on the south side of Route 12, Kingwood Township and Borough of Frenchtown, NJ. The company began laying pipe into the right of way along the south side of Route 12 but it was reported that the pipeline seemed to be encroaching on several streams that crossed the highway.

DRN staff investigated and discovered that the company had not secured any permits or approvals from NJDEP, despite the fact that the pipeline would need to cross several streams, all of which are Category 1 streams, requiring a 300 foot buffer (Lockatong Creek and 2 to 3 tributaries to Lockatong Creek, Little Nishisakawick and Nishisakawick Creeks).

DRN reported the violation through the NJDEP hotline on January 23, case number 080123134253. DRN visited the site on January 24 and photographed land disturbance, vegetation removal, evidence of an attempt to auger under at least one of the streams (Lockatong Creek), substantial vegetation disturbance and excavation within 25 feet of the stream and lack of any erosion or sediment control measures. Land excavation was also evident within approximately 15 feet of another stream crossing. Silt and sediment runoff from one excavation to the creek was documented.

A further report was filed with NJDEP enforcement division from the project site by DRN. NJDEP issued a stop work order on January 24. Elizabethtown Gas Co. will need to secure the proper stream crossing permits in order to resume construction of the pipeline. Since there is a 300 foot buffer on each side of each of the creeks that need to be crossed, it is likely that the company will be issued a Notice of Violation by NJDEP for soil and vegetation disturbance within the buffer area. The company had disturbed land and prepared it for excavation for at least 2 miles from the intersection of Rt. 519 and Rt. 12 at Baptistown and had illegally encroached on at least 2 streams. No disturbance to the west of Rt. 519, where the Nishisakawick and Little Nishisakawick creeks are located, had yet occurred.

DRN also reported the lack of sediment controls to Hunterdon Conservation District, who is further investigating the implementation of the approved erosion and sediment control plan for the project.

The gas pipeline is planned to deliver natural gas to the Kingwood Business Park, which is under construction on Route 12, and to Frenchtown Borough. According to a public presentation about the project, the pipeline originates at Magnesium Electron in Kingwood Township, is an 8-inch polyethylene pipe, and will be 50-60 psi.