Update September 27, 2019 -- Delaware Riverkeeper Network submits new comments to the Township and PADEP.  The closing paragraph of the comment reads:

"Clearly, the Township cannot provide an approval for proposed development, and PADEP cannot provide an honest and supportable Feasibility Study Report review, based on this morass of inaccurate, inconsistent, undefined, undetermined, and wishful thinking assumptions and assertions.   It is time for the Township to reject the CDP development proposal and for PADEP to demand a defensible Feasibility analysis that is based on reality."

Want to learn more?  You can see the whole coment here.

Update July 1, 2019 -- PA DEP has posted the remediation investigation documents for public review. You can find them here.  We will provide additional detail on the proposal and comment opportunities as information emerges.

Update 2 for July 1, 2019
The Delaware Riverkeeper Network continues to submit comments to the Township and other officials expressing concerns regarding the October 2018 CDP development proposal. Read here for the first set of comments, here for the second set, here for the third set.  If you would like to submit your own comment you can gather all the information to do so here.

Update: April 29, 2019 — Delaware Riverkeeper Network Wins Challenge Over State Sweetheart Deal With Bishop Tube Site Developer
East Whiteland, Chester County, PA–Responding to a legal challenge filed by the Delaware Riverkeeper Network, the Pennsylvania Environmental Hearing Board (EHB), in a rather scathing opinion, has ruled that the Pennsylvania Department of Environmental Protection’s approval of amendments to a Prospective Purchaser Agreement that would allow development of the highly contaminated Bishop Tube site located in East Whiteland, PA is “arbitrary and capricious” and therefore the agreements are void. View the rest of the press release and decision here.

Update: October 9, 2018 -- New Development Proposal submitted to East Whiteland Township:
October 9, 2018 new plans for developing the bishop tube site were submitted.  The development is limited to the actual bishop tube manufacturing site and so the number of units is limited to what was originally proposed (or thereabouts) for this area.  The proposal is for 93 units.  While this seems far less than the original 228 proposed, because we are talking about a significantly smaller area of land, in fact what is being proposed is comparable to what was proposed in the past.

On August 14, 2019, the Township BOS approved a letter from O’Neill granting an extension of time to February 28, 2020 for the Township to act on the revised Preliminary Plan.

You can find information about the new development proposal on the township website at: https://www.eastwhiteland.org/351/Bishop-Tube-Land-Development

Please express your thoughts, concerns and ask your questions of the East Whiteland Supervisors. They meet at 7 pm on the second wednesday of each month.

Update: As of February, 2018, the Delaware Riverkeeper Network has pursued three legal actions regarding the Bishop Tube site:
1. February 21, 2018, the Delaware Riverkeeper Network filed an appeal with the Environmental Hearing Board challenging the Pennsylvania Department of Environmental Protection’s (DEP) ratification of two amended Prospective Purchaser Agreements (PPA) (which are settlement agreements) entered into with a proposed developer of the former Bishop Tube site, a highly contaminated site located in East Whiteland, PA.  The organization challenged the agency for being a rubber stamp on the deal that were not publicly noticed until 7 to 10 years after they were signed by the state.  The challenge asserted that the state failed to acknowledge critical changing facts, including that the DEP had voided key elements of the agreement which it chose not to disclose to the public, and that the anticipated development shifted from commercial to residential, but this too was not acknowledged by the state. In April 2019, the Pennsylvania Environmental Hearing Board (EHB), in a rather scathing opinion, ruled that the Pennsylvania Department of Environmental Protection’s approval of amendments to the Prospective Purchaser Agreement that would allow development of the highly contaminated Bishop Tube site located in East Whiteland, PA is “arbitrary and capricious” and therefore the PPA agreements are void.   Learn more here.

2. November 8, 2017, the Delaware Riverkeeper Network filed a legal challenge against the Pennyslvania DEP for its “manifest neglect and dilatory conduct, over a period of seventeen or more years to clean up or cause the cleanup of past and present hazardous releases at the Bishop Tube Hazardous Waste Site (“Site”), which have caused contamination to spread off-Site, and impacting the off-Site groundwater quality, and to impact the Little Valley Creek, an Exceptional Value stream. The main contaminants of concern are Trichloroethylene (“TCE”) and other chlorinated Volatile Organic Compounds (“VOCs”) and metals.    These contaminants were released at this Hazardous Site and may continue to be released due to the malfeasance of the DEP and potentially responsible parties.”  The case is ongoing.  Oral argument is to be held on June 4, 2018.

3. The Delaware Riverkeeper Network submitted two Right to Know Requests to PADEP on February 23, 2017, and PADEP denied access to all responsive records, citing the internal predecisional deliberation exemption, the attorney-client privilege and the attorney work-product doctrine. On April 20, 2017, the organization appealed that decision.   On July 5, 2017 the Delaware Riverkeeper Network  received a favorable decision from Pennsylvania’s Office of Open Records (OOR), who found that the Pennsylvania Department of Environmental Protection (PADEP) improperly withheld public records regarding the Bishop Tube site in East Whiteland/Malvern, PA.

More than 200 people showed up at a June 7 informational meeting to challenge the Pennsylvania DEP about the proposed development of the Bishop Tube site in East Whiteland Township. Residents are concerned about the proposed clean-up of toxic TCE at the formal industrial site. PADEP officials were also challenged by the Delaware Riverkeeper Network about details of the case that had not been released to the community.

Update July 26, 2017:  Click here to see video of residents speaking out in defense of their first amendment right to oppose development of, and demand full clean up, the Bishop Tube site.

The Bishop Tube Site is a former metals processing plant located in East Whiteland Township, PA.  The site is bordered by Little Valley Creek, a tributary to the exceptional value Valley Creek. Portions of the site are wooded.  As a result of the historic uses at the site it has been designated as a Brownfields site.

Groundwater, soil and surface water at the Site are contaminated with TCE, which is classified as a probable human carcinogen by the EPA, and related products.  TCE is chlorinated solvent and one of the problematic volatile organic compounds (VOCs) identified at the site, first in 1987.  Chlorinated solvents are dense non-aqueous phase liquids, or DNAPLs.  They are denser than water and have a low solubility.  However, they are sufficiently soluble to cause a problem in both ground and surface water.  The EPA maximum contaminant level (MCL) for TCE is 0.005 mg/l, with a zero desirable concentration (https://www.epa.gov/ground-water-and-drinking-water/table-regulated-drinking-water-contaminants#Organic, visited 2/18/17).  EPA lists it as a discharge from metal degreasing sites or other factories and that it causes liver problems and an increased risk of cancer (Id.).  Related compounds could include 1,1,1-trichloroethane and 1,1,2-trichloroethane (Id.).

Constitution Drive Partners, the current owner, is proposing a residential development at the site. They had sought to secure a $1 million grant of state funds to undertake a partial remediation of the site so they can cut the trees, alter the landscape and build over 200 residential townhomes. Saturated soils and groundwater, including discharges to neighboring Little Valley Creek, would remain with plans for full remediation unknown.  Community concern and opposition to this misuse of taxpayer dollars has, so far, prevented its being paid out.

The developer has continued to advance options for developing the site, the most recent proposal being submitted on october 9, 2018.

The Delaware Riverkeeper Network opposes development of the site. We are joining the community in calling for full remediation of the site, at the expense of the known responsible parties, the natural woods, wetlands and creek protected, and the property turned over to the community as preserved natural open space. 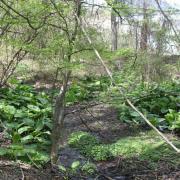 The 13.7 acre Bishop Tube site (located in Chester County, PA, on the east side of Malin Road, south of US Route 30) has been abused by industry for over 50 years. The site, formerly used to process precious metals and fabricate tubing and pipeline products, is heavily contaminated with chlorinated solvents, acids and heavy metals. This contamination has impacted neighboring communities and the environment.

Rather than continue the abuse, and destroy all the natural beauty of the site for a massive, oversized, development, the community wants the site contamination fully cleaned up by responsible parties and the site protected as natural open space. Protection will benefit all who live around the site in Frazer, Malvern and East Whiteland, and will benefit all who appreciate, enjoy, and live along Little Valley Creek, tributary to Valley Creek, the stream directly in jeopardy from the proposal.

Contaminants currently at the site include TCE, nitric and hydrofluoric acids; various oils; and other hazardous materials not properly handled or disposed of. Industrial operations began in 1951.  The plant closed in 1999.

While the site is dangerously contaminated, there is also beautiful nature worthy of saving.  Woodlands, wetlands and Little Valley Creek, part of the exceptional value Valley Creek watershed, grace the location as well.

The proposed development, including approximately 200 new homes, would cut trees, damage the creek and wetlands, and only partially address contamination at the site. Saturated soils and groundwater would remain highly contaminated. Contamination would continue to affect the surrounding environment and community, including ongoing discharges of contaminated groundwater to Little Valley Creek. When full remediation would take place and at whose expense continues to be totally unknown.

Update Re SLAPP Suit: June 27, 2017, Brian O'Neill and his corporate counterparts filed a SLAPP suit against the Delaware Riverkeeper Network, Delaware Riverkeeper Maya van Rossum, a private citizen and threatened to include 10 additional residents as defendants. On August 22nd the suit was quickly dismissed with the judge ruling:

"This is what we call constitutionally protected free speech under the First Amendment of the United States Constitution and the Pennsylvania Constitution..."

September 22, 2017 Brian Oneill and his counterparts appealed the decision, once again misusing the law to try to threaten opposition to his plans for Bishop Tube.  September 6, 2018 the Pennsylvania Superior Court dismissed the appeal, finding no basis for overturning the case.  In a September 20, 2018 filing, O'Neill et.al sought to have the court reconsider the decision.  November 2, 2018 the Superior Court summarily rejected the request for reconsideration.